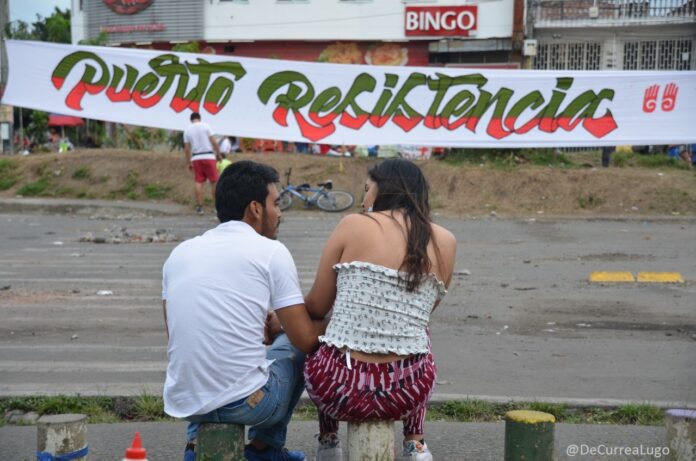 It was barely my second night in the city of Cali, after weeks of covering the protests staged in Bogota, within the framework of the national strike. I had already visited several areas of protests, among them, one known as Puerto Resistencia (Port of Resistance).

It is an old crossroad, the reason behind it being called Port, where businesses that sold black pudding (Rellena) started to appear, and which helped it establish its name, Puerto Rellena. Like most of the areas of protests, the people’s imagination decided to rename it, giving way to the initials PR, which may be used to identify both names.

In my first visit, I saw a mural that pays tribute to Nicolás Guerrero, a symbol of the youth of Cali, assassinated during the first days of protest. Near-by, a police command, a CAI (Comando de Atención Inmediata for its acronym in Spanish), has now been converted into a cultural space; some publicity has been transformed into calls to the streets; there are barricades set up with whatever was at hand; stones scattered on the roads; garbage adequately piled up, which is frequently gathered avoiding the filth; and a lot, a lot of dignity.

We were with congressman John Jairo Hoyos, visiting an area called El Paso del Comercio (the Commercial Area), also rechristened as El Paso del Aguante (the Stronghold), when we heard the news that Puerto Resistencia had no electricity.

These blackouts come with a price, and sometimes precede the attacks against the protest areas. So we decided to go over there. Thanks to a colleague journalist, I was given the contact information of an insider who could allow us in. Many controls have been established over who enters or leaves the area, due to rumors of infiltrators.

There was indeed some distrust, a lot of it, very clearly justified. Once we had managed to get though some control points, we were greeted and welcomed. The silhouettes of the houses could be seen in the dim lights of the bonfires set up by the youth to provide some light, which I believe was for them to shine with their own light.

It started to rain, first water and then the bullets. Several shots were heard and then a couple of bursts. The people opted between fleeing to protect themselves behind a wall and throwing themselves to the ground. Everyone was worried about knowing who had been wounded.

The way they moved and took care of themselves told me that this was not the first time this had happened; in fact, shots were being fired from cars and SUVs that fled the scene and were not stopped by the police, even if there was a lot of surveillance in the surroundings. It just seems strange.

Revising my voice notes in which I was recording the facts, I found one of them that made me ashamed because it reflects the eagerness to tell the truth and, at the same time, transmit a part of me trying to survive. My audio reveals, “Someone is shooting, but everybody is fine.”

When the shooting was over, the people gathered again to attend to everyone’s needs: those who were thirsty, those who wanted to eat something, or those who were controlling the security. I do not know how many of these people knew each other, but it is interesting to feel the fraternity and care they have for each other.

The rain stopped in Puerto Resistencia, a few more shots were fired, but the ambience was still one of youth. After being there for a while, when everyone was calmer and more comfortable with me being around, they brought me a chair to sit down on, something to drink, and they gave me a safety helmet and a bullet-proof vest. They share whatever is theirs with us, and have done the same with other members of the press. A helicopter may be heard flying over the area.

Let there be light

It was almost nine o’clock in the evening when the electricity came back. The people celebrated it as if it were a small victory. A few minutes later, Alberto Tejada came. He is the Director of Channel 2. Alberto has worked for years as an independent journalist. He has opened his microphones to the streets, to the youth; they recognize him and applaud him when he arrives.

It was surprising to see that once Alberto asked for volunteers to speak on camera, there were not only a lot of them, but those who spoke did so with exceptional political clarity. One of them said he was an engineer, another an attorney. One of the people living of the streets said he would like to finish his primary school education, and all of them clearly mentioned the profound reasons behind the national strike.

They are angry at the press that stigmatizes them, they distrust those who judge them without even visiting them once. They tell me a recent heroic story: they brought over 500 police officers from Bogota, who could not control the streets and were defeated.

They have no time to read the social media insults, much less the “orders” that some unknown people wish to deliver to them on chats. They shout out resistance from the outside, all of the time; but I believe that from the inside, the word is another: solidarity. I ask myself, if this is not solidarity, then what is it?

PS: While the people who were protesting were being shot at from unmarked vehicles in the streets of Cali, the Minister of Defense was trying to convince the country (due to the vote of no-confidence against him) that everything was fine; that as García Márquez said, “Nothing has happened in Macondo, nothing has ever happened, and nothing will ever happen. This is a happy town.” End of the communiqué.