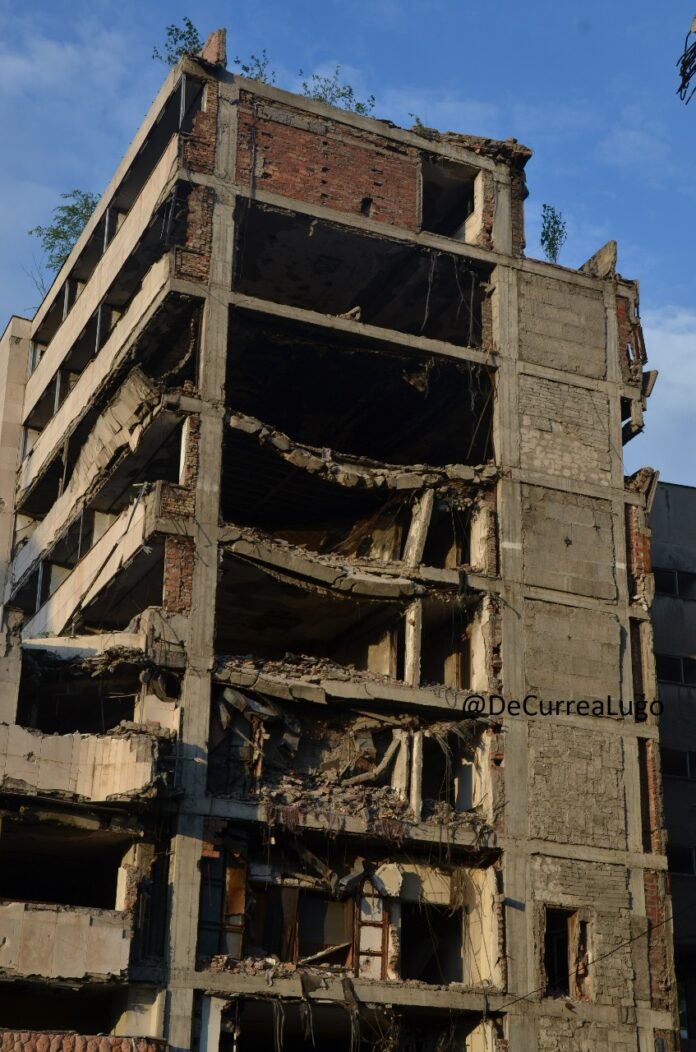 The North Atlantic Treaty Organisation (NATO), founded in 1949, is knocking on Ukraine’s door. And that makes the analysis of the ongoing war even more complex. It is an international war that began long before February this year and in which much more is at stake than the control of the Ukrainian east.

The photos accompanying this article are from the aftermath of the NATO attack on Belgrade in 1999 as part of the war in the former Yugoslavia.

Let’s start by saying that NATO is a military treaty, a military agreement between powerful states born out of the Cold War and against an enemy that no longer exists: the Soviet Union.

According to its own documents, NATO “promotes democratic values and enables members to consult and cooperate on defence and security-related issues to solve problems, build trust and, in the long run, prevent conflict”. Despite the claim of promoting “democratic values”, NATO’s huge operation in the former Yugoslavia was not exactly about respect for human rights.

And militarily, NATO is, in its own words, “committed to the peaceful resolution of disputes. If diplomatic efforts fail, it has the military power to undertake crisis-management operations. These are carried out under the collective defence clause of NATO’s founding treaty, Article 5 of the Washington Treaty or under a United Nations mandate, alone or in cooperation with other countries and international organisations”.

This last statement is even more dangerous, because it contradicts the UN Charter on the use of force, because it was not collective defence that brought it to Yugoslavia. What they call “crisis management” is not at all different from what Putin calls a “special military operation”: an occupation.

In response to the creation of NATO, the Soviet bloc created the Warsaw Pact, another military alliance to counterbalance NATO, in 1955. This Pact was dissolved on 1 July 1991, while NATO not only remained, but grew from 15 members then to 30 in 2012.

There is another, smaller organisation: the Collective Security Treaty Organisation (CSTO), founded in May 1992, among six post-Soviet states: Russia, Armenia, Kazakhstan, Kyrgyzstan, Tajikistan and Uzbekistan, claiming to fight terrorism and organised crime.

Azerbaijan and Georgia also signed the treaty to be part of the CSTO, but later withdrew, as did Uzbekistan. Its armed force is the Collective Rapid Reaction Force, deployed in January 2022 in response to the protests in Kazakhstan.

NATO, looking to the East

When the Union of Soviet Socialist Republics was dissolved, part of the agreement was that NATO should not be enlarged eastwards, not even dismantled, but limited to those countries that were already members, so as not to pose a threat (real or perceived) to former Soviet countries.

Part of the solution would lie in fulfilling the 1991 commitment: “In the framework of the negotiations in the Two-plus-Four format, we made it clear in the two-plus-four negotiations that we would not extend NATO beyond the Elbe. Therefore, we cannot offer NATO membership to Poland and the others. [Eastern European countries]”, said Jurgen Chrobog, a representative of the Federal Republic of Germany, “although the magazine points out that the diplomat apparently mistook the Elbe for the Oder River”. But NATO’s bombing of Yugoslavia in the spring of 1999 changed the Russian perspective and they began to see NATO as a threat.

NATO not only remained, but, contrary to its promises, has established itself as a mechanism for absorbing Eastern European countries, looking at Ukraine and Georgia, both of which are in tension with Russia. It is worth noting that the European Union, beyond the euro and its own bureaucratic institutions, does not have a single political voice, let alone a military arm independent of the United States. 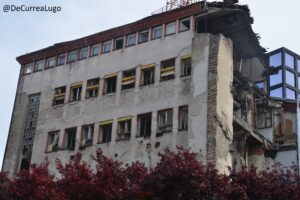 It has always been said that, if the great powers have nuclear weapons, they act as a deterrent to prevent a no-win war.

The same (with variations) could apply in analysing the development of military pacts.

But when it becomes clear that a military pact grows into a monopoly of force that threatens its neighbours, then the balance of deterrence, on which stability is based, is lost.

NATO’s defensive character was diluted completely when it entered the war that disarmed the former Yugoslavia without a UN mandate and without legitimate self-defence. That was a violation of the UN Charter. Numbers vary according to the source, but several thousand died (at least 1,200) in the 78 days of continuous bombing. Over 9,000 tons of bombs, some containing depleted uranium, fell on Yugoslavia (then comprising Serbia and Montenegro).

NATO claimed, as Russia does now, to be there in the face of ethnic cleansing against the population of Kosovo, and for that purpose a whole narrative was created to make the world believe that genocide was already underway.

NATO used the notion of “humanitarian intervention” to meddle in Kosovo, although this is a concept that has no basis in international law. Similarly, the prosecutor of the International Criminal Tribunal for Yugoslavia, Carla del Ponte, did not even open an investigation into alleged NATO crimes in Yugoslavia. In other words, the tribunal looked into Serbia’s crimes, but not into crimes against Serbia.

NATO’s damage was not only to military targets, which were mainly achieved in the first 3 days, but also to power plants, factories, aqueducts and means of communication; they even bombed the Chinese embassy in Belgrade. The operation mainly involved the armies of Germany, Spain, the United States, France, Italy, the United Kingdom.

This war was not about defending the Albanians in Kosovo, but about imposing a form of government and economic policies. It was an imperial move by the United States and its allies. In the end, Kosovo was recognised as a state, hastily, thanks to the imposition of the powers, while cases such as Palestine and Western Sahara continue to wait.

On the streets of Belgrade

In the streets of Belgrade, people remember. Indeed, the ruins of the Ministry of Defence that was attacked by NATO, as well as the Belgrade Telecommunications Headquarters building, remain. They remain destroyed as a reminder of what happened here. There are also a couple of symbolic graves of two bodies that have not been found and a large tombstone bearing the names of the dead with a sign in Serbian asking “Why”.

Very close to St. Mark’s Church there is a statue of a girl who was killed in the NATO bombing. Next to it is a sign in Serbian and English that reads “We were just children”; this is a permanent reminder of the war crimes committed by NATO. It should be clear to us that what NATO can do against a civilian population is not merely a possibility, for Serbs and those who remember history it is an absolute reality.

Serbia has not forgotten NATO’s aggression, which is why it refuses to be part of this military alliance, an organisation that is more an international extension of the US Department of Defence than a European security agenda (without mentioning the fact that Russia is part of Europe, of course).

Although the Serbian government has declared its respect for international law, it maintains strong ties with Russia, including hydrocarbon supplies, as well as sharing the Orthodox religion and the Slavic tradition. This is why Serbia is seen by many as Russia’s Balkan pawn.

It is curious that Serbia’s far right supports Putin, using the argument of “denazification”. Serbs support Putin, moreover, because the murder of civilians by NATO is still going on. This is also why the Serbian government has not joined the sanctions against Russia. Meanwhile, the far right in other European countries supports Zelensky, which again shows that it is naÃ¯ve to try to see ideological blocs where there are none.

NATO’s expansion is one of the arguments in this war in Ukraine, as is ethnic cleansing in the east of the country. On the security risk to Russia, the Cuban case of 1962 is cited, when the United States and the then Soviet Union came close to a collision over the deployment of missiles in Cuba, just over 1,800 kilometres from Washington.

In the case of a nuclear deployment on Ukrainian territory, the distance would be less. In fact, it is just over 730 kilometres from Kiev to Moscow. But there are differences in this argument: Riga, the capital of Latvia, which is already part of NATO, is only 918 kilometres from Moscow. And from the border, Moscow is about 620 kilometres closer than Kiev is to Moscow. But it is clear that military tension does not depend only on the use of nuclear weapons.

Russia has for years made clear what NATO’s expansion would mean for its security. So, although for some the NATO issue may sound like an excuse, both its growth in member states and Russia’s misgivings have gone hand in hand for many years, and this cannot be ignored. 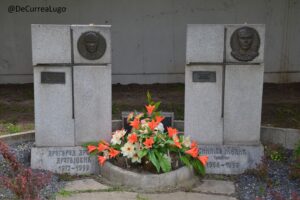 The truth is that in the former Yugoslavia NATO claimed to defend human rights in order to violate human rights, it claimed defence against a non-existent attack in order to justify an occupation, it claimed genocide in order to devastate a country with tons of bombs. Thanks to NATO’s action, it became clear that law without the sword yields to the sword without law.

Originally published in The Prisma